Still Painting After All These Years...A Portrait Of An Artist 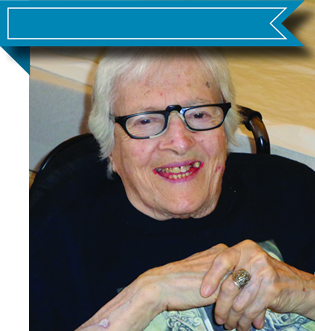 Nancy Weinberg has been receiving a lot of attention lately. Weinberg, an artist-in-residence (literally) at Lieberman Center for Health and Rehabilitation in Skokie, has enjoyed the publication of several articles about her and her artwork–one in the Chicago Jewish News (CJN) and one in ESRA Magazine, an English-language journal published in Israel (www.esra-magazine.com). The attention is well-deserved but she takes it in stride and is quick to point out the role that Lieberman Center has had in helping her to pursue her passion.

Nancy Weinberg says she began drawing as soon as she could hold a pencil and, at 12 years of age, she received a scholarship to the School of the Art Institute of Chicago. She went back to school at age 50 after her two children grew up, and she got an art degree on full scholarship from Northeastern Illinois University. After retiring at 70 from her work as a secretary, she says she “almost never put down my paint brush.” She has had several exhibitions of her paintings, and adds that she has also sold some of her art.

In the article that appeared in ESRA, Weinberg explained: “The day I retired I picked up a paint brush and have never put it down. Since moving to Lieberman five years ago, I was determined to continue painting but because of limited space, I was forced to scale down from large paintings to a small easel and 9x12-inch canvases. But what to paint on a 9x12 canvas? Portraits of course! So began my odyssey through my past of the painters, authors, poets, singers and political figures who played such an important role in my life.” 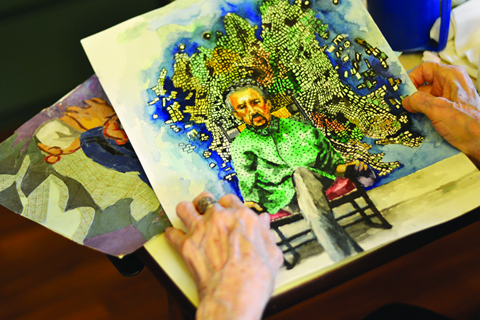 Weinberg has been living at Lieberman almost 6 years, and she’s truly made it home with all her art materials, books and, of course, paintings and other art pieces. Remarking on the unique of her small private room, she acknowledges “it’s a mess.” But a keen sense of organization and remarkable ability to store a tremendous amount of possessions are evident. The room serves as a showplace of her immense talent, her high productivity and her strong interest in politics and activism. She specializes in portraits from photographs, and she paints them realistically and without irony in the medium of acrylic paints. But she does not paint just any portrait. Her choices of subject matter include her “heroes,” as she calls them–some of them famous, some of them obscure. And their obscurity attests to the sharp mind and intellectual curiosity that Weinberg has always had–and still displays–into her 95th year. 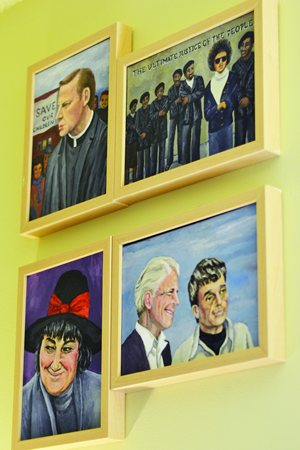 On her easel is a recently completed painting that shows the boxer Mohammed Ali helping Chicago Mayor Harold Washington to campaign. She asks visitors if they recognize the subject of the portraits. Some are obvious and iconic: the Argentine Marxist revolutionary and guerrilla leader Che Guevara; the self-portraitist and promoter of Mexican culture, Frieda Kahlo; and the feminist member of congress, Bella Abzug. She doesn’t miss a beat as she goes around her room naming the less recognizable faces: Otto Dix the German artist; Zero Mostel as Tevya; playwright Bertolt Brecht; union organizer Joe Hill; anti-apartheid activist Steve Biko; and social justice singer-songwriter Woody Guthrie, to name a few. You get the picture. One’s eye is drawn to the image of possibly the least well-known figure in the room— Father Michael Pfleger, the activist priest who is the pastor of the mostly African American parish St. Sabina on the South Side. “He’s a hero of mine,” Nancy admits. And as she further explains in the Chicago Jewish News: “I admired those who fought for the disregarded and overlooked in society. They became my heroes. Their belief systems spoke to me deeply.”

About her painting at Lieberman, she reflects: “I didn’t paint for about a year because my hands quiver. But Melissa Miller, the art therapist, got me started again within the last year. I originally created pictures with her, cutting out paper images and assembling them, like collages. She had me cut up paper pieces and then glue them down into patterns and images, like mosaics.” She pointed to a recently-completed watercolor that appeared to portray a brightly-lit skyline and said: “It’s actually supposed to be an aerial map of New York, but I couldn’t do that, so I did a mosaic. It’s amazing I’ve done so much art with my hands shaking like they do!” Art Therapist Miller comments that “It is wonderful and inspiring that she is doing this at her age.” 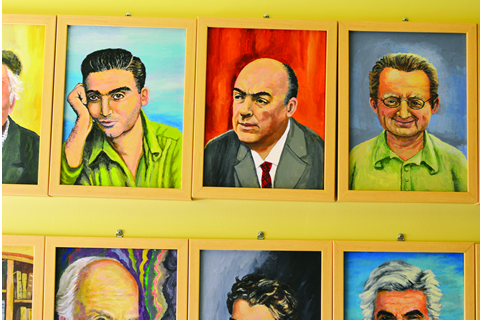 Art Therapy is one of the many Life Enrichment Activities that Lieberman Center offers its long-term and short-term residents. It is illustrative of our strong commitment to our mission of enhancing the quality of life of older adults by providing person-centered care. 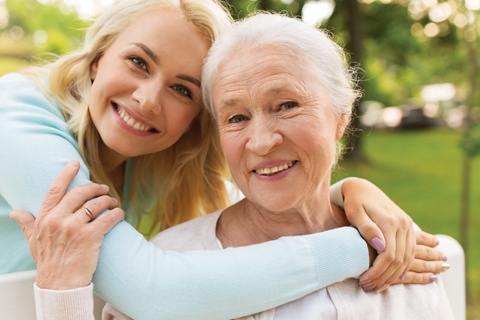 We Recognize Alzheimer’s and Brain Awareness in June

June is Alzheimer's and Brain Awareness Month. Find out how CJE can help individuals and their loved ones by educating, providing support and care, and managing transitions. 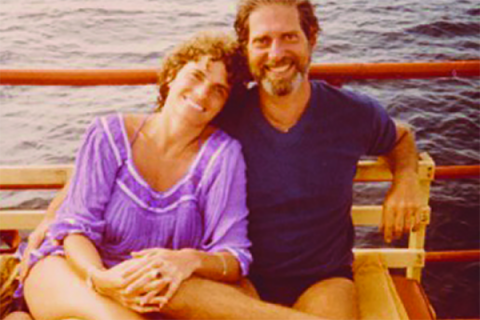 The Silver Lining...CJE at Sinai

A personal perspective from the spouse of a client at CJE at Sinai, an Adult Day Services Program geared toward older adults with early to moderate memory loss. 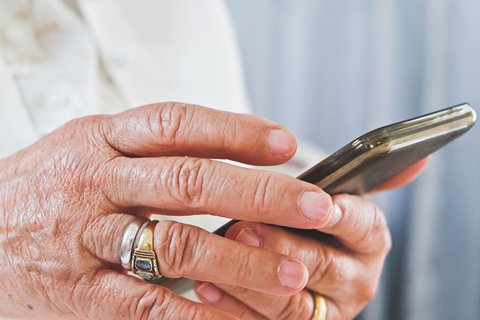 Caregiving — There's an App for That!

There’s just about an app for everything… in fact, as of May 2017, there were 2.2 million available apps just in the Apple App Store. Fortunately, the surge in apps has not bypassed the caregiver and eldercare industry. According to a New York Times article (2013), caregivers are “early adopters” when it comes to using apps and online tools. 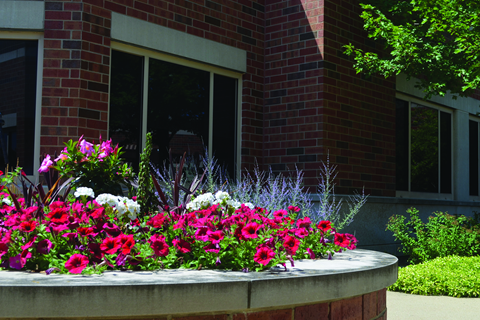 A Sense-Sational Walk Down Memory Lane

As we’ve seen, art is a successful means of engaging and connecting with people with dementia. However, the sensory realm is another dimension that can be manipulated to affect their mood and emotions. Studies have shown that people with dementia tend to be less agitated, depressed or confused if they are surrounded by things that are familiar to them.