In June, we celebrate LGBTQ Pride. With social justice at the core of Jewish values, CJE has a culture  and history of inclusivity. CJE recently revised the inclusion statement on our website to read: CJE  SeniorLife strives to enhance the lives of older adults regardless of religion, sex, race, ethnicity,  disability, sexual orientation, gender identity or national origin. We also distributed our email signature guidelines to employees that included wording for the optional use of pronouns. Why go to these lengths? CJE wants to make it clear that we are committed to diversity and inclusion.

So, what do the words diversity and inclusion mean? Some people use the words interchangeably, but there is a distinction. As Rabbi Dovid Rosenfeld writes: “Diversity is the mix, inclusion is making the mix work.” (Torah.org). For CJE, it means not discriminating on any basis, whether it be in our recruitment and hiring practices, in our program and service offerings and to whom we provide them and in being mindful of the differences that we all have. 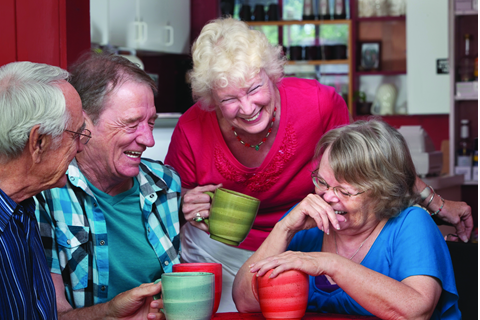 Serena Worthington, Director of National Field Initiatives at SAGE | Services & Advocacy for LGBT Elders, enumerates CJE’s efforts, past and present, that are proof of our commitment to diversity and inclusion. A former staff member of CJE’s Counseling Services designed the first LGBTQ cultural competency training for frontline staff. This training had a video component and a curriculum, and modules were offered to outside professionals and agencies. Additionally, a controlled study at CJE’s Independent Housing showed that providing education to residents changed their perception about LGBTQ older adults. The study had the bonus of making LGBTQ residents in the buildings more comfortable being openly LGBTQ. Worthington adds that, “Simply the fact that I am here at CJE keeps LGBTQ issues in staff members’ minds.” This was intentional, as Worthington requested an office at CJE, and CJE was extremely receptive. “It has been just an amazing post,” says Worthington.

Rosann Corcoran, Director of CJE Counseling Services, notes that “We have been active members for many years of the Chicago Task Force on LGBTQ Aging Network.” In fact, CJE has consistently hosted the quarterly meetings of the Network. CJE is hosting the Network on June 6, with Corcoran giving a presentation. Sharon Dornberg-Lee, Clinical Supervisor for Counseling Services, has represented CJE regularly at these meetings. She explains, “This network affords CJE the opportunity to learn about the needs of older LGBTQ individuals, available services and programs geared toward this population—from housing, to health care, to inhome services—and ways in which CJE can work to ensure our services are inclusive and affirming.” Corcoran estimates that about 5% of Counseling’s clients are LGBTQ. Finally, HR Manager Hedy Diop wanted to increase CJE managers’ cultural competency on gender identity. She was referred by Worthington to Lisa Gilmore, who presented a brown bag session on “Gender Identity in the Workplace” in August. 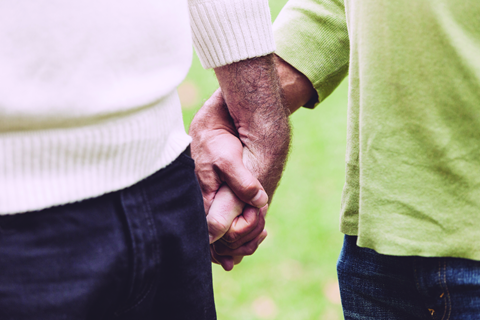 Serena Worthington oversees SAGE affiliates, facilitates policy advocacy on LGBTQ aging issues and helps strategize with partners to work effectively on behalf of LGBTQ older people. Because of her work, she has a great deal of insight into the behaviors, attitudes and needs of older LGBTQ adults. She explains: “Even if there’s a nearby senior center, those with an abiding interest to be with others like themselves will go to great lengths to do so, like taking an hour and a half bus ride to the Center on Halsted, which is Chicago’s largest LGBTQ community center that SAGE helped found.” She continues, “Just as people form their own groups to speak French, read books, cook or follow the Cubs, LGBTQ older adults also self-organize into their own affinity groups. So, across the country there are events like the monthly Sunday lesbian potluck that’s existed for 40 years, or the long-standing gay opera appreciation group. Locally, there’s a chapter of the Prime Timers (for mature older gay and bi-sexual men) that’s very active.” SAGE’s job is to bring these organizations together and make sure that they have a formal structure and are welcoming.

Worthington is conversant in the myriad issues LGBTQ older adults face, including discrimination, isolation and health issues. She expresses concern that, for older LGBTQ older adults who have lived for many years with HIV, the effects of aging with it—and taking so many medications for so long—are not known. People with HIV who are 50 have the health status of 70-year-olds. She’s reassured by the fact that older adults who are newly diagnosed with HIV do as well or better than younger people, with better meds compliance a contributing factor. She is very concerned about threatened changes to the Affordable Care Act that could make medicine for HIV unaffordable or remove protections for pre-existing conditions.

Worthington knows about the trials and successes of older LGBTQ adults coming out and in relationships. First, she says that LGBTQ older adults who are comfortable being out easily find each other in the big senior centers. “Unfortunately,” she says, “some closeted LGBTQ seniors are afraid to associate with openly gay residents because they worry about being outed themselves.” She sympathizes with LGBTQ older adults who don’t come out and their many reasons for doing so. The decision to remain closeted was common among older gays, who lived in an era when honesty about one’s sexual orientation and/or gender identity could lead to arrest, violence, blatant employment and housing discrimination and social and familial rejection.

She relates happier outcomes among people who came out very late in life, which she said is very common. She knows of a 93-year-old man “who knew he was gay at four years old, but he got married because that’s what you did at the time. He said he loved his wife and would never have come out if he hadn’t lost her. But when she died, he came out and eventually found a partner.”

If you are LGBTQ and thinking about counseling, our trained professionals are highly sensitive to and experienced with LGBTQ older adults’ issues. Contact Counseling Services at 773.508.1000 to make an appointment.

61% of LGBTQ over 45 years believe that society has changed its attitudes about LGBTQs in the past decade. Thus, LGBTQs are more likely to come out more readily. Unfortunately, Worthington says that some LGBTQ older adults who need extended care in a health facility end up going back into the closet because it’s easier for them. She explains: “Many are afraid of being discriminated against by straight staff members. And, if something bad does happen, they won’t complain because they’re afraid of retaliation. Many actually delay care because of this fear.” Worthington applauds the large population of LGBTQ older adults who have been out their whole lives and who are now advocates and researchers gaining a lot of awareness and good media attention for LGBTQ older adults.

Worthington, who also serves on the Chicago Department of Public Health’s LGBTQ Health Advisory Council and is Co-Chair of Chicago’s LGBTQ Aging Network, is certainly one of those advocates. And she passionately strives to make SAGE the LGBTQ arm of the aging movement rather than the aging arm of the LGBTQ movement. “That’s because SAGE can be more effective serving a much larger demographic—since the aging sector is massive,” she says. Ultimately, SAGE’s priority is working at the intersection of race, socioeconomic status, health status and ability, assuring that diverse LGBTQ elders are included, counted and served equally.

LGBTQ organizations and SAGE affiliates in the Chicago area

Town Hall Apartments
3600 N. Halsted St., Chicago
312.660.1374 | heartlandalliance.org/housing/ourproperties/town-hall-apartments/
Opened in fall of 2014, in partnership with the antipoverty group Heartland Alliance and Center on Halsted. It’s Chicago’s first LGBTQ-friendly senior housing with retail space and community rooms for classes and special events. Its occupancy is 70% LGBTQ/30% straight. Applications are being accepted for a pre- waiting list.

The National Resource Center on LGBT Aging
lgbtagingcenter.org/index.cfm
The NRC provides training, technical assistance and educational resources to aging providers, LGBT organizations and LGBT older adults. The center is led by SAGE, in collaboration with 18 leading organizations from around the country.

Facebook provides more than 50 options beyond “male” and “female” for users to describe their gender identity, from “gender questioning” and “neither” to “androgynous.”

In case you need an LGBTQ Cultural Competency Primer:
CISGENDER—a person who is not transgender. (shortened: “cis,” the Latin prefix for “on the same side [as]
GAY—word used to describe men and women attracted to the same sex (lesbian more common for women).
BISEXUAL—refers to people who relate sexually and affectionately to both women and men.
GENDER IDENTITY—a person’s perception of having a particular gender, which may or may not correspond with their birth gender.
HETEROSEXUAL—people who have male-female affection/sex.
HUSBAND/WIFE—proper for all references to individuals in any legally recognized marriage regardless of sexual orientation.
TRANSGENDER—refers to people who present themselves in a way that does not correspond with their gender at birth.
TRANSSEXUAL—refers to a person who changes gender by undergoing surgical procedures.
http://www.apa.org/pi/lgbt/resources/language.aspx 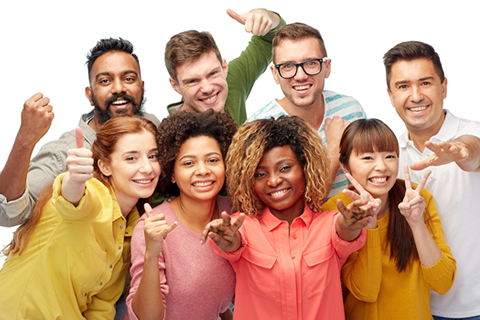 See how our President & CEO views CJE’s commitment to diversity and how it cannot be a success without an inclusiveness that values and embraces our differences. 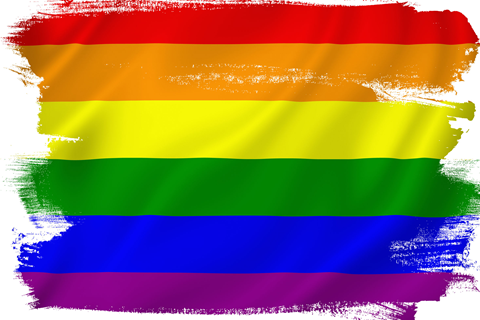 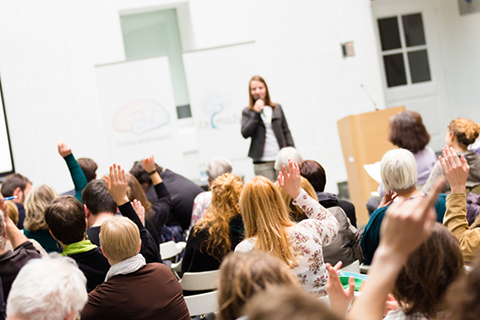 Taking Disability Advocacy to the Next Level

Find Out About an Upcoming Slate of Nationally-Recognized Self-Advocates and Mentors Coming to Speak at a CJE Co-Sponsored Event in March. 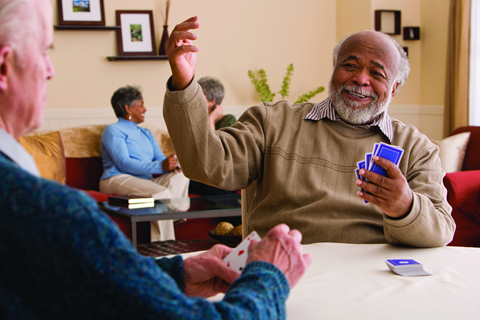 Profiles in Diversity: The Face of Older America

As the overall minority population in the U.S. grows and experiences greater longevity, the older population is becoming more racially and ethnically diverse. This article provides interesting data and information on the diversity of older adults and the different issues faced by those in the minority, such as health disparities. It also includes information on resources, including help for Russian-speaking older adults.